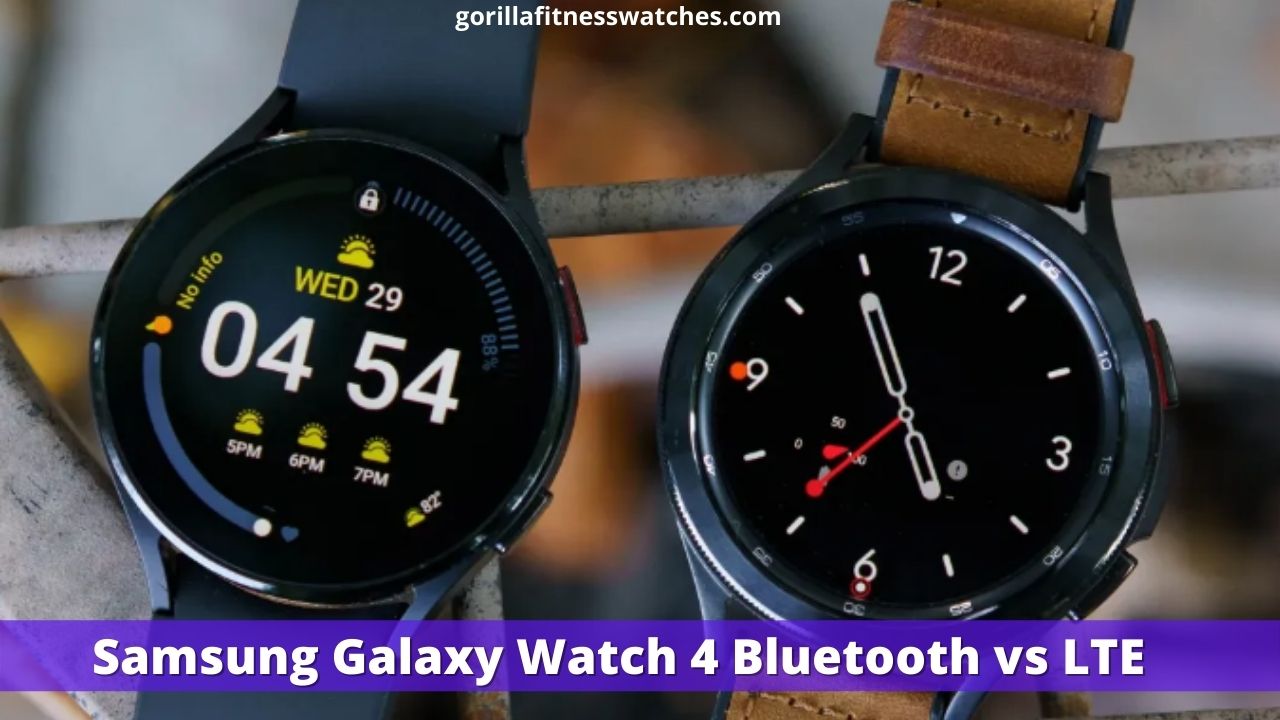 Samsung always launches two variants with its flagship watch. The new Samsung Galaxy Watch 4 and Watch 4 classic also come in Bluetooth and LTE variants. This Galaxy lineup also follows the tradition of Apple watches that launch both Bluetooth and cellular models with every flagship watch.

Galaxy Watch 4 comes in 44mm and 40mm sizes, and both have Bluetooth and LTE variants. Most people are confused when choosing between LTE and Bluetooth variants. There is no big difference between Galaxy watch 4 LTE, and Bluetooth models except price and LTE, all the fitness tracking and other specifications are similar.

The LTE model helps you make calls and reply to a text without connecting your smartwatch with your phone.

The new Galaxy Watch 4 runs on Wear OS and is packed with the most powerful 5nm W920 chip that offers extra fast performance and a better UI experience. You will also get upgraded 16GB storage in both LTE and Bluetooth variants.

Today’s article will deeply compare the difference between the Galaxy Watch 4 Bluetooth VS LTE variant. After going through this guide, you will decide which one you should choose.

There is a difference between LTE and Bluetooth models when it comes to price. The LTE variant is slightly more expensive than the Bluetooth variant. The Galaxy Watch 4 40mm LTE variant is available for $219, and the 44mm variant costs $249.

There is not a big difference between prices. But when you choose a wireless charger, the price tag will reach $309 for a 44mm galaxy watch 4 and $279 for a 40mm model.

The only standalone feature in Galaxy watch 4 makes differences between the LTE variant and Bluetooth variant. The standalone smartwatch supports an e-sim that allows you to make direct calls and reply to a text without using smartphone connectivity.

Samsung has also introduced a web browser in Galaxy Watch 4, so you can use it on LTE variants without any smartphone connectivity, which is a plus point. The Bluetooth model of Galaxy Watch 4 also supports calling and texting features, but for this, your smartwatch must be connected with your phone.

For stable Bluetooth connectivity, your smartphone must be near your; otherwise, you can’t use calling or texting features.

The LTE model gives you more freedom when it comes to ease, so you don’t need to carry bulky phones with you during outdoor sports.

Before choosing the LTE variant of Galaxy watch 4, you must check whether the LTE feature is supported in your region or not. According to that region, you can check the official Galaxy Watch 4 LTE carrier list and find an LTE watch.

Note: If you want to use a single phone number, your smartphone and Galaxy Watch carrier must be the same.

The LTE model and Bluetooth both come with 361mAh of battery, which gives you an average of 40 hours of battery life. Most people think that the Galaxy watch 4 with the LTE variant has less battery life, but this is not the right case.

When you turn on LTE on your smartwatch, this feature will shorten the battery performance.

Similarly, both 44mm and 40mm models offer similar battery timing, so you don’t need to worry about the battery draining when it comes to LTE.

Which One Should You Choose LTE or Bluetooth?

There is not much difference between Galaxy Watch 4 LTE and Bluetooth variant, except you will get LTE. So now the question is which one you should choose? The LTE variant might be a better option because it gives you more freedom to use calling and texting features.

In a nutshell, the LTE model is better for and it just costs a few bucks for a data subscription for your watch. Galaxy Watch 4 comes with a few improvements that make it a most valuable galaxy watch. It has an armor Aluminium metal frame that looks more attractive and shiny. The high-quality material not only makes it attractive but also durable.

The frame is covered with Corning Gorilla Glass DX+, scratch-resistant, and 50 meters water-resistant. The straps are made of Silicon, and you can also interchange the strap according to your need.

When it comes to displaying, you will get a Super AMOLED display which is extra bright and vibrant than Galaxy Watch 3.

You will get a 1.4″ display with 450 x 450 pixels resolution, the display is big enough, and you can easily read it in outdoor situations. Under the hood, you will get an Exynos W920 Dual-Core 1.18GHZ processor that makes your smartwatch performance much faster and smooth.

The apps open and close too fast than before, lagging. Samsung has partnered with Google and introduced Wear OS in its new Galaxy Watch, so you have access to all the Google products and apps.

Further, you will get 16GB of memory that allows you to store tons of songs and apps. You can also stream music from third-party apps like Spotify or Deezer.

The Galaxy Watch 4 is also packed with built-in GPS that helps you track your routes and provide more accurate data. Making contactless payments with Galaxy Watch 4 also becomes very easy; the NFC feature is way better than before.

Note: All the features mentioned above are the same in both Galaxy Watch 4 Bluetooth and LTE variants.

Galaxy Watch 4 is one of the prominent fitness trackers in the market that give more useful health tracking features. This time Samsung has introduced a BioActive sensor that measures your body composition in real-time that helps you keep a close eye on your health goals.

Similarly, ECG and blood pressure monitoring is also one of the key features of this watch, and you can measure your blood pressure or take ECG readings on the spot. Plus, with the Galaxy health app, you can generate a PDF report shared with the doctor.

Galaxy Watch 4 also offers stress monitoring, so you can monitor pressure on your brain and find some best times to relax. You will get breath exercise that helps you reduce stress and calm down.

Moreover, Galaxy Watch 4 has advanced sleep tracking, calories tracking, steps counter, women’s health tracking, and more. In the sports department, you will get some proper outdoor modes that help you measure your every outdoor activity deeply.

Further, a fall detection feature is valuable for the elderly. In case of any incident or fall, your watch will automatically send an SOS to your emergency contacts.

Note: All these features are available in Galaxy Watch 4 Bluetooth and LTE models.

In the Galaxy Watch 4 Bluetooth VS LTE comparison guide, you have seen that the LTE model is more convenient and gives more freedom to use smartphone features.