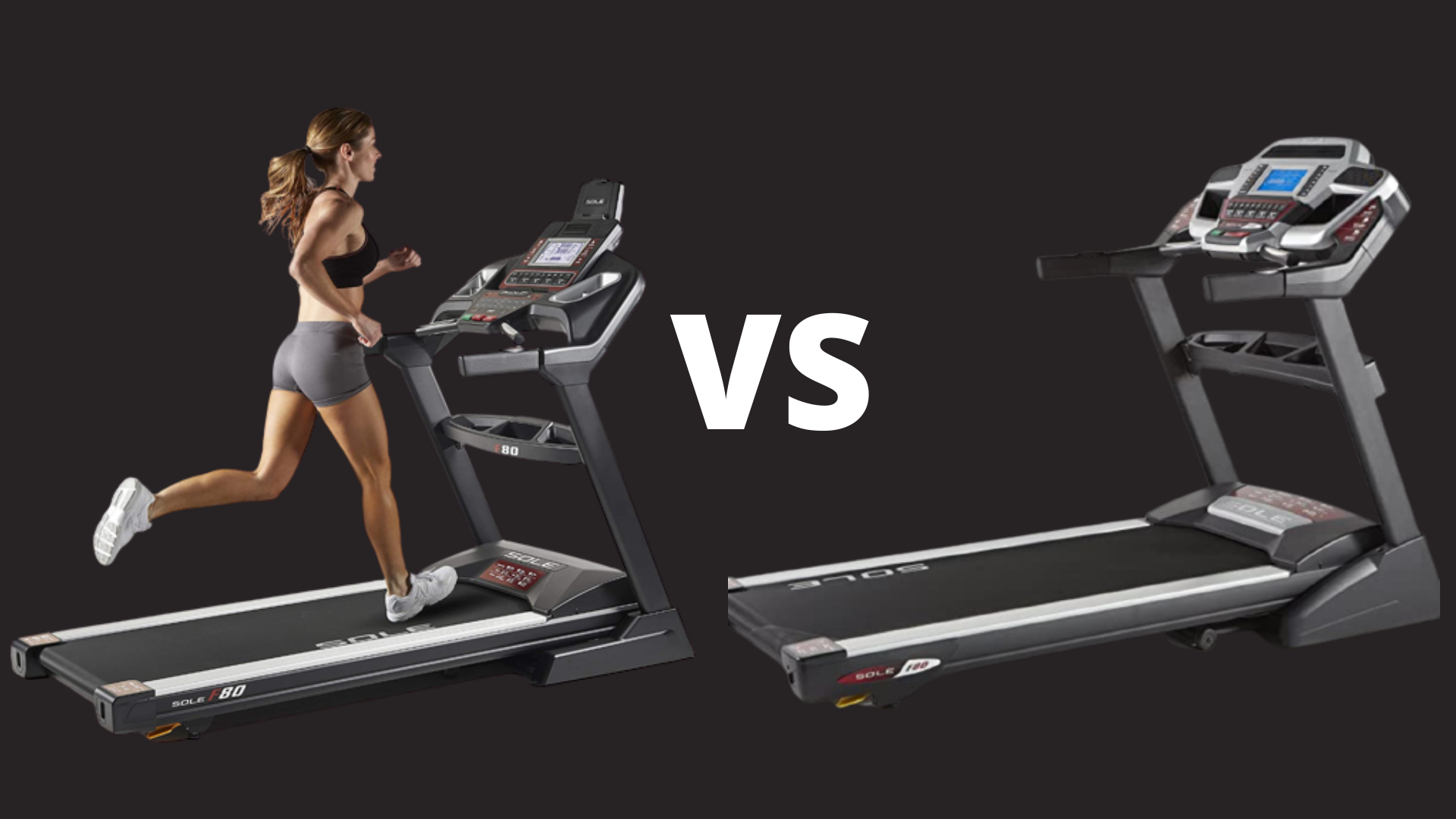 Today, we are comparing two treadmills that are pretty popular among people looking for treadmills for home use. Those two treadmills are Nordictrack Commercial 1750 and Sole F80.

Although the price range of both the treadmills is almost the same with having a $100 difference between them.

Because both the treadmills don’t have a significant difference in their price, therefore we will compare their features to know which one is the best.

Both the treadmills have excellent quality and are thus suitable for use if you are looking for a good treadmill for a good run to have a healthy lifestyle.

However, as we compare them, you will know the differences between them and which treadmill suppresses the other in certain features. Here is a comparison of both the treadmills based on their build and design.

No doubt, both treadmills are made with premium quality materials.

Undoubtedly, the parts on Nordictrack look good but are not thick. In contrast, the parts on the F80 are thicker and more rigid and are made of plastic.

Indeed, the F80 has better and high-quality plastic material but compared with the Commercial 1750, it is more sturdy.

The broader base doesn’t let the treadmill Commercial 1750 shake much. In contrast, the F80 wiggles and shakes when you walk on it.

Firstly, talking about the deck cushioning, which is a little sparse in F80 when compared to Commercial 1750.

F80 has a less flexible deck, but the Commercial 1750 deck is flexible and cushioning.

As the treadmills go up in price, the issue of assembling them becomes common. The same is the case with Sole F80 and Commercial 1750; they were challenging to assemble.

The winner in this category is clearly Commercial 1750.

It is an essential feature for treadmills to have. And that’s where sole treadmills win the race because of their high weight capacity.

Therefore, when searching for a more weight-bearing treadmill, go for the F80!

Talking about the folding of these treadmills, they both have hydraulic systems for folding, which makes the treadmill easy to fold.

It gets easier to raise the treadmill deck. Another fantastic thing is that you can lower both the treadmills hands-free.

What makes the F80 a little more convenient is the location of its release handle.

Its deck release handle is located high and also on the side under the deck, but the Commercial 1750s release bar is located under the middle of the deck.

The Size Of The Motor

The motor of NordicTrack is powerful and significant, having 3.8 CHP. In contrast, the Sole treadmill has a slightly smaller 3.5 CHP motor.

Although both make similar noises, the Sole F80 is louder than Nordictrack Commercial 1750.

Both the treadmills have a top speed of 12 mph.

Comparing both the treadmills, The NordicTrack is 4 inches taller and 1 inch broader than Sole. While the Sole is 10.7 inches longer than the Nordictrack Commercial 1750.

Undoubtedly, the extra length of Nordictrack can be an issue for people searching for a compact treadmill.

Sole 480 and Commercial 1750 have the same heart rate monitoring.

They both have handlebar pulse grips, which are not so accurate on almost any of the treadmills. Both the treadmills also have iFit chest straps, and both function the same.

Although, treadmills are supposed to be heavy because of the function they serve.

But depending on the user to use the heavy weight of the treadmill might be a problem. The Sole F80 weighs 278 lbs, while the Commercial 1750 weighs 310 lbs.

The fans in the Sole treadmill are more decorative than functional. There is a single fan unit in Sole F80; two small fans are also located inside the unit.

You won’t feel the output of an F80 fan unless you are walking.

In contrast, the Commercial 1750 possesses two fan units, one of which is on the console while one is below the console.

The fans have various speeds that you can adjust as per your desire.

The sole F80 wins this category due to its better weight-bearing feature, folding, compact dimension and light weight for easy movement. The NordicTrack has 38 workout programs that are built on the treadmill and are well organised.

They also have the option of workout type and fitness levels, due to which you can easily find the program by using the touchscreen.

On the other hand, the Sole treadmill has only eight programs having two program slots so that you can create your workout program.

A defect of F80 would be that it does not have all the incline and speed levels listed. You will have to scroll and search if you want a specific speed or incline without the button.

The treadmill displays, i.e. Nordictrack and Sole are pretty big.

The display of Commercial 1750 is 7 inches with a high-definition touchscreen so that you can navigate the treadmill with the touch of a finger!

On the other hand, the display of the F80 is not a touchscreen; therefore, navigating it is not as spontaneous as the Commercial 1750.

Nordictrack is clearly the winner of this category due to its variety of programs, incline controls and speed and high definition touch screen. As much as the other features are essential, entertainment features for users are also an integral part of the treadmill.

These features keep you engaged and let you enjoy your workout.

Sound quality and volume are two things that make a good speaker.

The speakers on F80 are decent and have good sound quality, but the volume is not as much as the Nordictrack 1750.

Moreover, the clarity of sound is better on the Commercial 1750 than on the Sole F80.

Likewise, Commercial 1750 has many high-tech features. It has Wi-Fi connectivity that allows you to continue your online activities.

Also, you can watch shows on Hulu, YouTube and Netflix and more.

But the Sole F80 doesn’t have such entertainment features.

Once again, Nordictrack wins the race because of its good speakers and Wi-Fi connectivity.

Display of the data

You might feel it necessary to receive the data on your workout progress. The display of the F80 shows less measurable data than the Commercial 1750.

By using the Sole fitness app, the usage of F80 can be easier because you can control the treadmill from your device. Furthermore, you can create user programs, adjust speed, track your workouts and also save the workout data.

Although the app is entirely free, it can sometimes freeze to a point where you may need to restart your device to close the app. And sometimes, the data of your workout may not be recorded.

However, to access the iFit app, you will have to pay a membership fee. You will find a vast library of treadmill workouts, workout videos for when you’re off the treadmill and much more.

Paying for the app might feel unworthy initially, but once you pay and view the features of the iFit app on Commercial 1750, you’ll love it.

Nordictrack is the winner when it comes to data tracking features from displaying the data to amazing features of fitness apps, it is all in one package.

After being winner in 3 different categories, Nordictrack is the winner in comparison between Sole F80 and Nordictrack.

As mentioned earlier, Sole F80 and Commercial 1750 have almost the same price range, but if we look at the functions, they are not the same.

The weight capacity of the F80 is more than the Commercial 1750. But on the other hand, if we talk about the available programs, Nordictrack wins the race.

Similarly, the motor size of Nordictrack is more than the F80, but their max speed is the same.

Nordictrack weighs more than the F80, making it difficult to move while shifting or relocating. Likewise, Nordictrack also proves to be better for fans because of its adjustable feature.

Moreover, we discussed many more features specially designed for your convenience. We hope that by now you have decided which treadmill you will be buying.