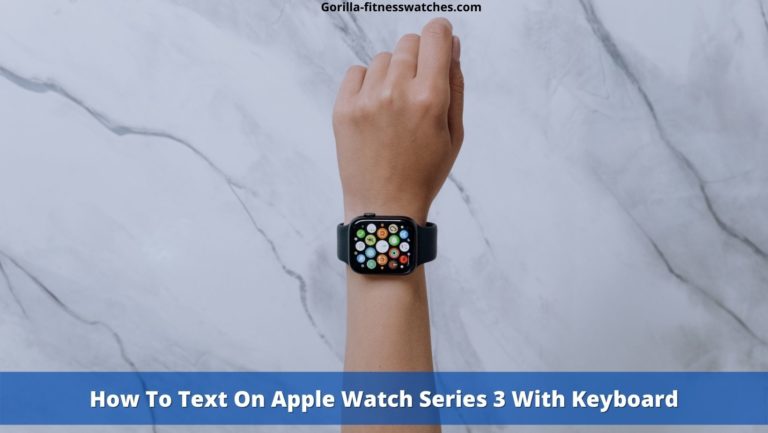 Are you interested in knowing” how can you text on an apple watch series 3 with keyboard”? If so, The first question that comes to your mind is, Whether the Apple Watch Series 3 has a keyboard or not?

An apple watch series 3 receives messages and calls, but is there any way to text back to the contacts via keyboard?

The apple watches have access to keyboards, but they start from watch 7.

Continue reading to discover some methods which can help you text back on apple watch series 3 !!!

How to Get a Keyboard On Apple Watch Series 3

However, there are two ways to simplify this using the

So, The apple watches don’t come with a built-in keyboard, but you can use the scribble feature or Siri to send emails and Text on your apple watchOS 3 and later.

How To Use The Scribble Feature? The Scribble tool allows you to write each letter of your reply with your finger. It’s simple to use, but it’s great for short communications. You wouldn’t be able to write a novel on an Apple Watch with Scribble messages, but you could use it to say “Hi” or “WBU” (what about you)

Scribble allows you to write letters on your watch’s screen to enter Text. As you write, your handwritten letters are turned into Text.

How do you scribble a message?

Whenever you’re ready to create a message using Scribble, follow these steps to access the feature in the Messages app.

If you ever want to change the Scribble language, go to the screen below the Scribble symbol and click Language. Then decide whatever Language you want to use with Scribble. In case you want to add Language to your keyboard, what you have to do is :

How To Use The Siri Feature You can use Siri on your Apple Watch to perform tasks and get answers. Use Siri to translate what you say into another language, and Siri will easily perform tasks like identifying a song and providing a fast result, or

After you ask a question, Siri displays the first few search results and a brief extract from each page for your general query.

To view the page on Apple Watch, press Open Page.

Siri can speak back to you just like it speaks back on iOS, iPad, and macOS. Siri responses can be heard through Apple Watch speakers or a Bluetooth headset.

Learn how to use Siri, Apple’s intelligent personal assistant that assists you in accomplishing your goals. Siri can send messages, make phone calls, provide directions, and much more.

To make a Siri request, do the following:

Tip: After you activate Siri, you can lower your wrist. You’ll feel a tap when there’s a response.

There is currently no native Apple Watch keyboard app available for older watches. Messaging using Scribble and Siri is both time-consuming and difficult; however, if you need a keyboard, the following keyboard apps appear promising!

You can use flick type, watch key, and modality type apps to text your contacts.

The most popular keyboard in the Apple App Store is FlickType Keyboard, as simple as it gets. FlickType is the closest you’ll get to a QWERTY keyboard if you want to go the more standard keyboard method.

The whole keyboard is displayed on the bottom half of the screen, while the top half displays a preview of the word you are presently typing.

FlickType offers some terrific features and settings. Open the app on your iPhone, make sure the Watch Keyboard is selected at the top, and tap the gear icon to open the settings.

WatchKey has various user-friendly keyboards that type on your Apple Watch a breeze. You can send messages securely, swiftly, and easily from any place with WatchKey.

After installing the WatchKey app on your Apple Watch, open it and get ready to type.

Like flick type, watchkey provides several settings and functions that you may try out. To see the following options, open the app on your iPhone.

Modality Type is a creative method to swiftly type messages by writing alphabets on your watch’s small screen.

The program uses a block system on the right side of the screen, and there are four blocks where the letters are arranged by shape.

You can see all of the ordinary punctuations available by scrolling. Periods, semicolons, colons, exclamation points, double and single quotes, question marks, and more are all available.

Continue reading to learn how to use Modality Type on your Apple Watch.

You can also check the numeric keypad. When you tap on that numeric keypad icon, you can see numbers 1 to 9 and zero and some emojis.

Below the number pad, Modality Type provides you with a delete key to erase the whole word at once.

You can write on an apple watch series 3 using its built-in apps scribble and Siri. While the Scribble tool isn’t ideal in every case, it can be really useful when you need to send a quick message without using Siri.

Scribble’s handwriting recognition and suggestion functions are fantastic, and they give you another method to communicate quickly when you need it.

Furthermore, there are various alternative ways to connect with anyone else using an Apple Watch if you don’t want to use Scribble and Siri to write a message for you.

1 thought on “How To Text On Apple Watch Series 3 With Keyboard?”