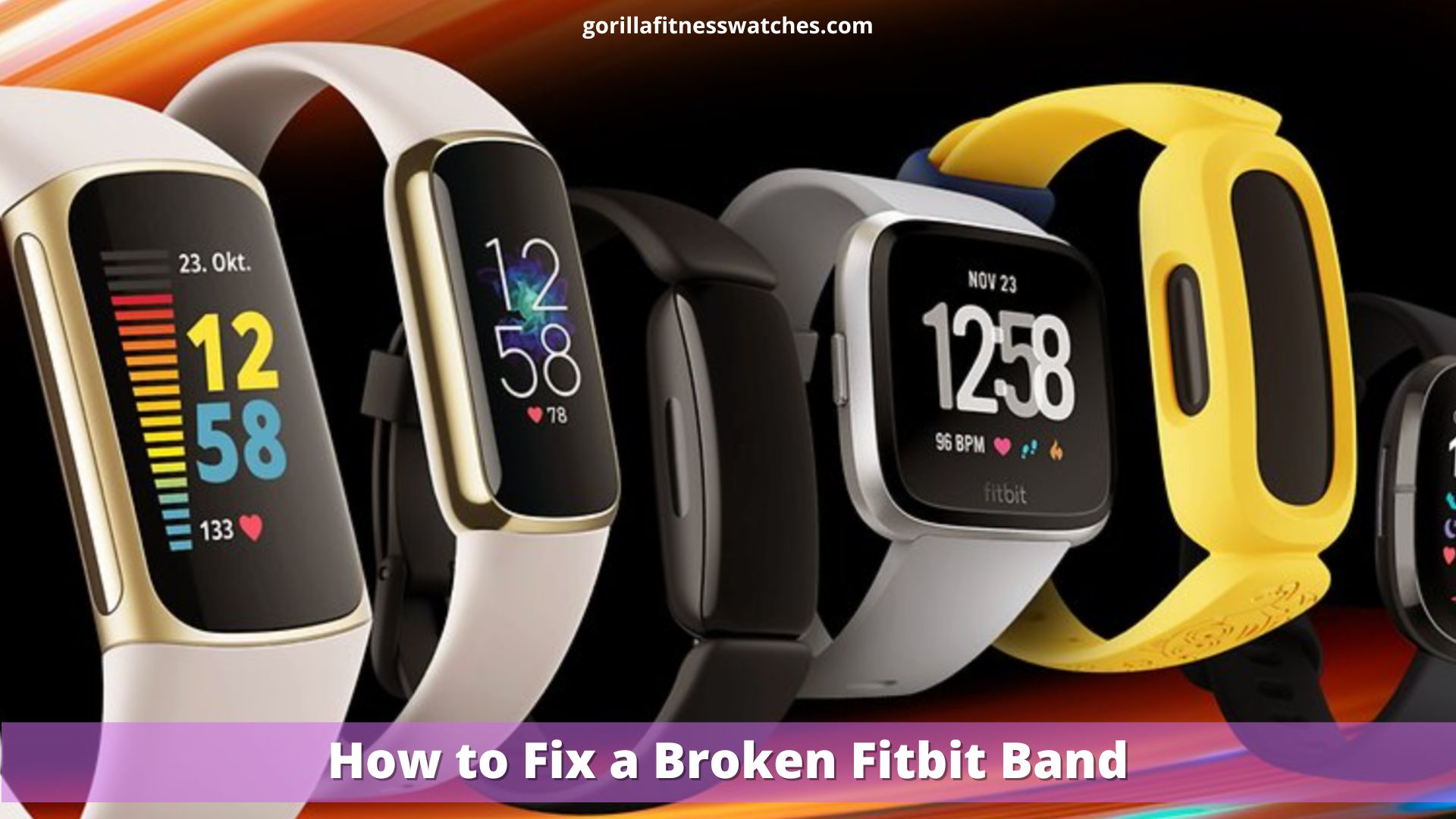 Fitbit is a well-known watch brand producing high-quality timepieces. Their watches are great for those who want to maintain a healthy lifestyle by keeping track of their daily steps and physical activity.

However, a common issue faced by the users of Fitbit devices is the breakage of their band sooner than expected. Some Fitbit devices’ bands break after only six months of use.

So, if you’ve experienced this problem with your Fitbit, don’t worry!

In this post, we will go over several fixes for a broken Fitbit band. We’ll also provide tips on keeping your Fitbit device in good working order and preventing it from breaking.

So, without any further delay, let’s get started.

How Do You Fix a Fitbit Broken Band Fixing a broken Fitbit band is a simple process. There are three ways of fixing this issue.

Fortunately, Fitbit provides a replacement policy for all fitness trackers covered by its warranty program. If you have a broken band, you should contact the manufacturer and have it replaced with a new one.

However, if your band breaks after the warranty period have expired, you can try to fix it with super glue or buy a new one from Fitbit or third-party vendors.

If your Fitbit band breaks while your watch is still covered by its warranty, you can file a claim with Fitbit to get a new one for free. For this, you have to sign in to your Fitbit account on the website and select “Submit a claim” to complete the procedure.

Once your claim is accepted, you’ll receive a replacement watch strap in a few days!

Remember: Keep in mind that Fitbit will only accept your request if the watch strap breaks due to a manufacturing defect. If this occurs due to a customer’s carelessness, the company has no responsibility for it.

In addition, make sure you have a warranty card or other proof of purchase, such as a receipt for a replacement.

2. Use of Super Glue

Most Fitbit bands typically break at the clasp. It results from a rigorous workout’s stress or normal wear and tear. Another great option to put your broken Fitbit band back together is to use super glue.

Let’s explore how to use super glue to repair a broken band on a Fitbit smartwatch.

Step 1: Dab a small amount of super glue onto the watch’s clasp.

Caution: Avoid getting any superglue on the Fitbit’s underside or top. It may cause harm to your device.

Step 2: Use a cotton swab or dry wipe to remove any excess adhesive from the surface.

Step 3: Carefully put the clips back together to ensure they are in contact with each other.

Step 4: Allow the glue to dry for a few hours.

That’s it. Your broken Fitbit band will now be fixed.

Important: Make sure that the glue you use is safe for your skin type before applying it. Gorilla Super Glue is the most effective glue for fixing bands.

3. Buy a New Band and Replace it All Fitbit bands are fastened to the tracker by buttons, screws, clips, or quick-release pins. By removing them, you can easily remove the band.

After removing the old band, you can quickly screw in or fasten the new one by inserting its metal clip into the band and clasping buttons.

However, if you’re not confident enough to replace it yourself, many repair services would be pleased to help.

Get Your New Fitbit Strap Now

Here’s a detailed step-by-step guide for replacing a Fitbit band with a new one.

Tada! A new Fitbit band is all set for use. Enjoy it!

Warning: When changing your band, don’t use excessive force! If the clip feels stuck, gently move the band in different directions to free it.

Tips for Maintaining the Fitbit in Good Condition

Unlike many pieces of technology, Fitbits are designed to be durable and last a long time. However, it does not imply that they are resistant to damage. Therefore you must still make an effort to take care of them.

Following are the essential tips on how to keep your Fitbit from breaking:

Cleaning your Fitbit regularly might extend the life of your device if you frequently use it outside. When using Fitbit devices outside, dirt and dust may reach the corners of the display and strap.

That’s why you should keep it clean at all times. You can clean your device with a soft-bristled toothbrush or a soft cloth.

Additionally, avoid using hand soap, body sanitizers, and cleaning wipes. Instead, use only pure water and a soap-free cleanser such as Cetaphil for cleaning.

Aside from being water-resistant, it’s best to avoid wearing your Fitbit when showering or swimming. It is because hot water and chemicals can harm the device’s sensors, resulting in inaccurate readings.

It is critical to understand that exposing your Fitbit to extreme temperatures and prolonged periods of direct sunlight might cause damage to the device. The heat can cause the battery to overheat, potentially causing harm.

In addition, the sun’s ultraviolet rays can deteriorate the plastic and harm the device’s electronic components. As a result, it’s advisable to avoid wearing your Fitbit in hot weather or leaving it in the sun for an extended period.

4. Be Gentle with the Straps

It is crucial to handle the straps and clips of your Fitbit with care to prevent any tears or loose parts from occurring. The straps are composed of an elastic material that is prone to tearing if handled carelessly.

Similarly, the metal clips are susceptible to bending and breaking if not handled with care.

Fitbits are a popular choice among fitness enthusiasts for their fitness tracking capabilities. However, the quality of their wristbands is the one thing that causes them to lag. Users frequently complain about their bands breaking or being of poor quality.

You can, however, fix this problem by filing a warranty claim or replacing it with a new one. Also, you can use super glue to attach the broken band. Besides, it is essential to take special care of your Fitbit smartwatch to maximize its lifespan.

After reading this article, we hope now you have a better understanding of how to fix a broken Fitbit band. If you have any other suggestions or queries, please feel free to comment below.

Thank you for reading!

1. How long is the Fitbit Warranty?

All Fitbit products come with a one-year limited warranty. Accordingly, Fitbit will repair or replace your gadget for free if it breaks due to a manufacturing flaw.

However, it is essential to note that the warranty does not cover damage caused by natural wear and tear, accidental damage, or poor maintenance.

2. How long is a Fitbit supposed to last?

Undoubtedly, Fitbits are built to endure a long time with regular use. The lifespan of a Fitbit, like any other piece of technology, can be affected by various factors.

For instance, regularly cleaning your Fitbit will help prevent corrosion if you frequently swim or sweat while wearing it.

Additionally, the internal components of your Fitbit may be harmed if you drop it or subject it to other forms of impact, reducing its longevity.