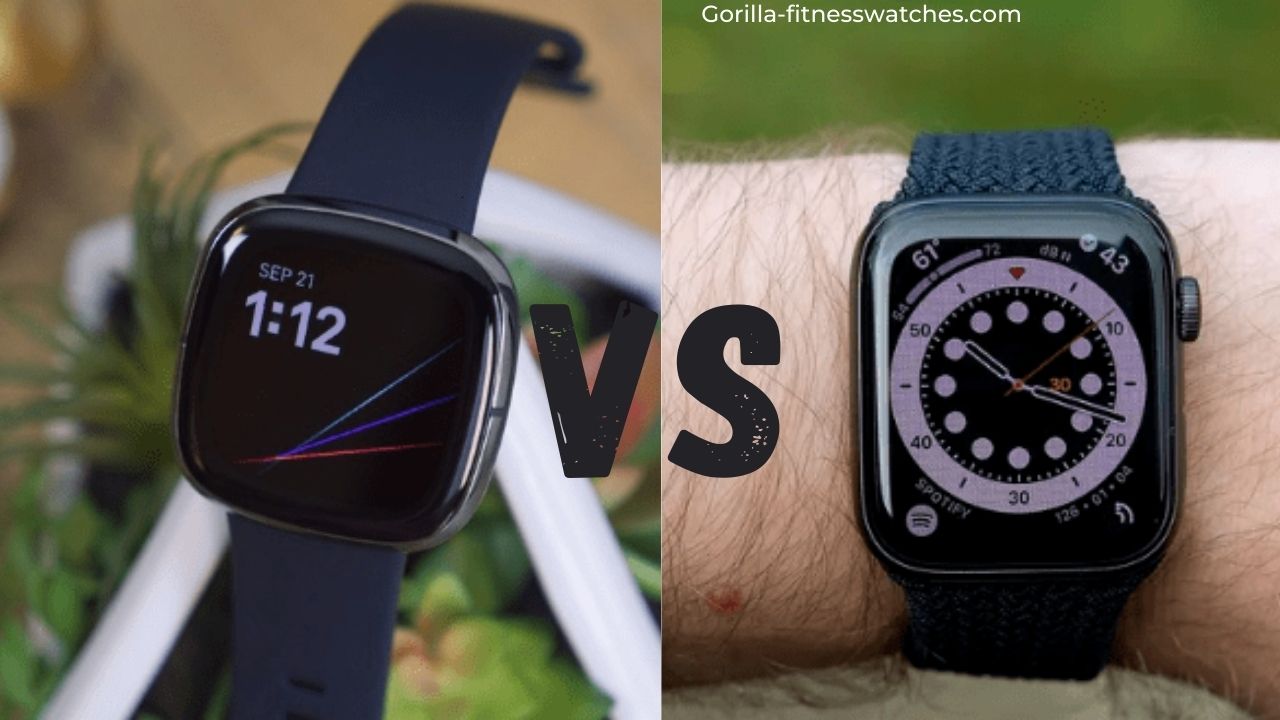 Fitbit Sense is one of the high-end smartwatches in Fitbit’s lineup, and it’s packed with the most premium features, including stress tracking, ECG app, body temperature measurements, etc.

On the other hand, the Apple Watch SE also offers comprehensive fitness tracking but lacks blood oxygen tracking. But sports enthusiasts often like to wear the Apple watch SE because of its advanced fitness and outdoor tracking.

Apple Watch SE also offers 32GB of internal storage for storing your favorite songs, podcasts, and other media. While the Fitbit Sense only has 4GB of storage so you can hardly keep 40-50 songs.

So in today’s guide, we will compare both Fitbit Sense and Apple Watch SE and try to find some major differences between both devices. 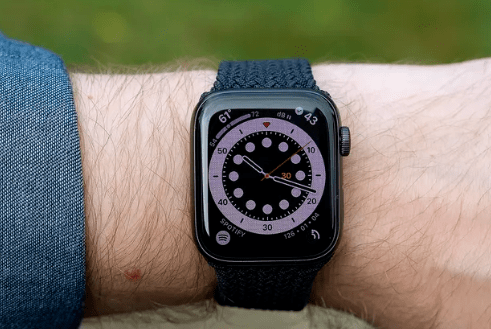 In the design department, both smartwatches look pretty different. The Watch SE follows the design of its predecessor, whereas the Fitbit Sense also follows the previous design with few changes. So let’s find out the differences.

The Sense is one of the most stylish watches that follow a similar design to the Versa. But this time, there is a stainless steel edge around the dial that looks so pretty.

On the side, you will get an indented haptic side button that controls the functionality. The screen is protected by Corning Gorilla Glass 3, which is scratch-resistant.

Fitbit Sense gives 5 ATM water resistance so you can wear the watch while swimming or bathing etc. This watch feels more comfortable than Versa 2.

The Silicone bands are too soft, and they will never irritate your wrist during workouts or bedtime. Thanks to its round finish, it gives a more luxurious feel and looks more stylish.

Apple Watch SE is not different from any other Apple Watch, and you will see the same curved outline. The watch is hosted in an Alumunium case material that makes it durable. Just like the Fitbit Sense Apple Watch SE offers 5ATM water resistance.

Following the tradition, Apple also introduced a digital crown in Watch SE that helps you to change the watch faces, switch between apps, pause/start workouts, and more.

The dial is protected by Sapphire crystal glass which is expensive and more robust than Gorilla Glass 3. So in the Sense of durability, Apple has done a much better job than Fitbit. 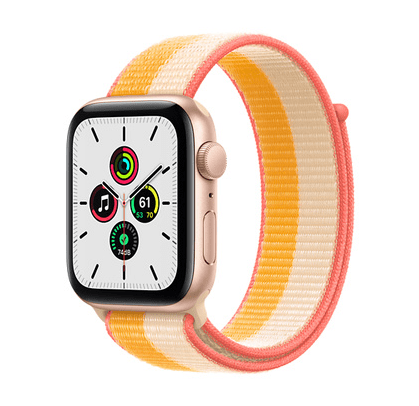 Both smartwatches come with a vibrant display with a more bright color tune, so you can easily read the dial under direct sunlight.

Fitbit Sense comes with a 1.58″ AMOLED display with 336 x 336 pixels. The display looks more premium and worthy than the previous Fitbit Versa 2/3. You can easily read the display outdoors, but it’s a little challenging to read for the elderly because of its small size.

From the Fitbit gallery, you can download dozens of watch faces according to your needs. But compared to Apple Watch, SE Fitbit Sense has fewer watch faces, and you can’t customize most of them.

Apple has made a strong reputation from the first smartwatch. The display of Apple watches comes with 1000 nits that are much more vibrant and sharp, thus feeling a more luxurious look.

In Apple Watch SE, you will get a 1.78″ (44mm) display with 448 x 368 pixels resolution, better than the Fitbit Sense. Secondly, you can easily read the dial because of its large size.

There are tons of watch faces available in this smartwatch, plus you can also change the color combination of watch faces which is another plus point. 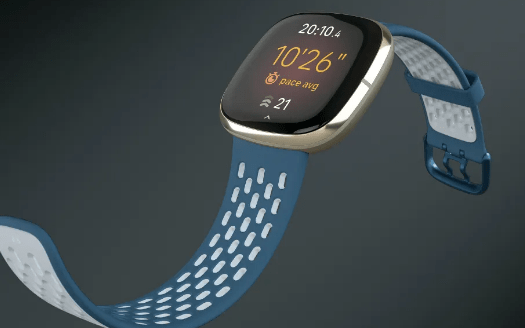 Both Apple Watch SE and the Fitbit Sense are packed with many features that drain the battery, so you can’t expect a longer battery life in both devices.

Also, the battery life depends on many other factors like Always on Display, GPS, health tracking features usage, etc.

In Apple Watch SE, you might be disappointed to see its battery timing which is 18 hours. But the Fitbit Sense gives 6+ days of battery life which is better.

You have to charge Apple Watch SE after every 24 hours, which might be frustrating for you. But in both devices, you will get battery saver mode, so if you are out of the city, you can save the battery backup for later use.

The Fitbit Sense and Apple Watch SE fall in the mid-range category, and their prices are higher compared to other competitors brands like Samsung, Amazfit, Xiaomi, etc.

You are aware of expensive Apple products, so the Apple Watch SE price starts from $279, and its cellular variant is available for $320. On the other hand, the Fitbit Sense is generally $199, cheaper than the Apple Watch SE and still the most expensive watch in Fitbit’s lineup. 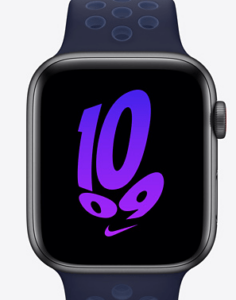 In any smartwatch, health and fitness tracking features are more crucial. If your smartwatch has fewer health tracking or fitness features, then it’s difficult for you to achieve your fitness goals.

Secondly, accuracy is most important; if your smartwatch lacks preciseness, then it’s useless junk. Although not any smartwatch is 100% accurate, most watches give results closer to actual values.

Fitbit smartwatches are well known for their excellent health tracking capabilities. And the Fitbit Sense comes with all the health features that make it more worthy.

It has an ECG app to track your heart health and patterns. Thanks to its altered system that notifies you when you are out of your zone or feel stressed. Further, there is a calories counter, SpO2 sensor, heart rate monitor, and advanced sleep-tracking tools.

But unfortunately, Fitbit Sense lacks a blood pressure monitor, which is its major downside. Thanks to its in-depth fitness tracking, you can deeply analyze your health tracking features that help you achieve your fitness goals.

Apple offers lots of health tracking features that help you to achieve your fitness destination. The primary thing that I love about this smartwatch is its accuracy. Apple Watch SE shows a very accurate heart rate reading.

For running purposes, the Apple Watch SE is an impressive device. We have compared the results with Coros Pace 2, and both of them show the same results. Apple watches are also perfect for pool activities tracking, and they perform even better than Garmin watches.

But if you are using Apple Watch SE for gym purposes, you might be disappointed because the gym profile only tracks heart rate and elapsed time. So if you are a gym enthusiast, Apple Watch SE is not a good option for you.

There are tons of other features in Fitbit Sense and Apple Watch SE. Firstly let’s discuss their calling features. Bott smartwatch comes with a built-in mic and speaker so you can answer calls from your wrist.

To make calls, you must connect your smartwatch with your phone. Apple Watch SE also has an LTE variant that doesn’t need any Bluetooth connectivity for calling features.

Then we have built-in voice assistants in both watches that allow you to do voice searches. You can check weather updates, set alarms, see calendars, control your smart home appliances, and more.

Lastly, you will get built-in GPS in both devices so that you can measure your destinations, distances, and speed, etc.

Both Apple Watch SE and Fitbit Sense are the best mid-range smartwatches, and both share some of common features.

After reading the above article, we hope now you know about the significant difference. In short, Apple Watch SE is best for outdoor and indoor use, whereas Fitbit Sense is the best option for health tracking but lacks some features for outdoor enthusiasts.